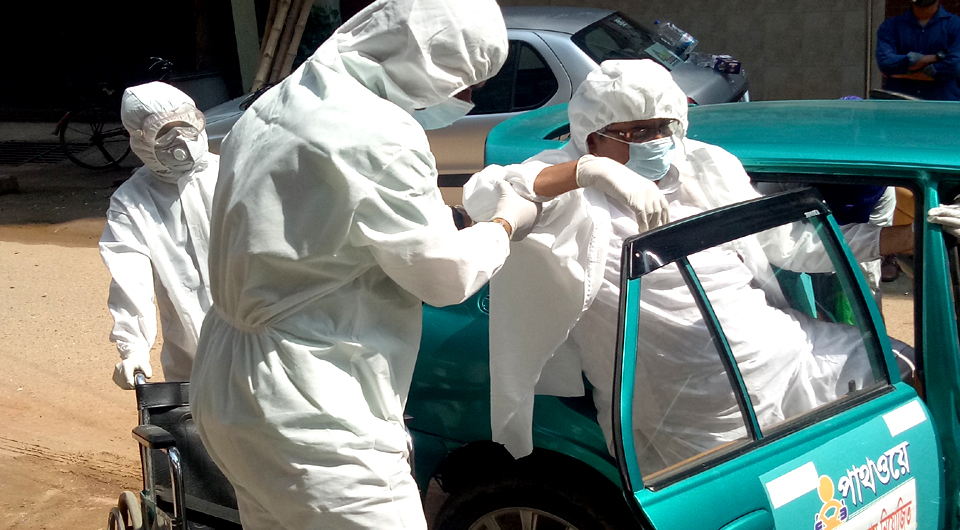 Health Service of the Injured Person and Burial of the Deceased

Pathway taking responsibility to inhume the corpses those died by corona: Today’s world is facing a global crisis due to corona virus. There is no such kind of situation that man's

faced before in history of this era. Now it has become an alarming  condition in world wide where mortality rate is so high in under developed countries. Whole world is in torment condition due to this disaster.  Already so many  people’s are pass away.  Like others countries,  this virus is also hitting in Bangladesh.  Day by day affected case are increasing along with also increasing mortality rate. To consider people’s Safety,  government is not handling dead body to their relatives.  Corpses are buried by government. But most of the time,  relatives are deprived of seeing off them last time and to take participate in their funeral due to lack of safety equipment and others. On the other side, many of them not taking responsibilities of corpses because of their personal safety issues.

On this regard,  "Pathway" a non-government Organization takes some initiative from the very beginning of this pandemic period.  Pathway form a committee of several members and volunteers to buried the corpses those are died by corona virus. The committee takes all the responsibilities of corpses.  If they get information,  they collect corpses with their own's transport that is free. Do religious rituals and buried the places chosen by death's relatives and kinsman or nearby cemetery to consult with them. Alluding that, if any orthodox Hindu's died by corona  and they need help.  Pathway come forwarded,  takes corpses to posthgola crematory near Dhaka, do proper Hindu rituals. Along with pathway also takes some other responsibilities like taking the affected to hospital with free transportation, take care of them, help them if any, serving free transport to pregnant lady if they need any emergency.

To day our beloved earth is passing a crisis period and it is increasing with tripling, whole world & communities are worried about it. Due to green house gas effects and global warming are causing climate change creating several natural calamities and disaster making hard to survive for the all living beings in the earth.